The Arlberg – famous for its ski slopes and downhill runs, but it also offers legendary views and breathtaking nature experiences in summer. The beautiful region and the Haldenhof offer a perfect symbiosis for everyone who loves hiking. Enjoy a wonderful landscape right on the doorstep, with beautiful hikes, lakes and a breathtaking mountain panorama.

We have already prepared information on the most beautiful hikes for you, categorised according to subject and level of difficulty.

Your hosts know the region like the back of their hand and the hotel provides everything for your hiking holiday, from a rucksack to tour information and insider tips. Everything is there for you and you and can easily set off for the mountains directly from the hotel. 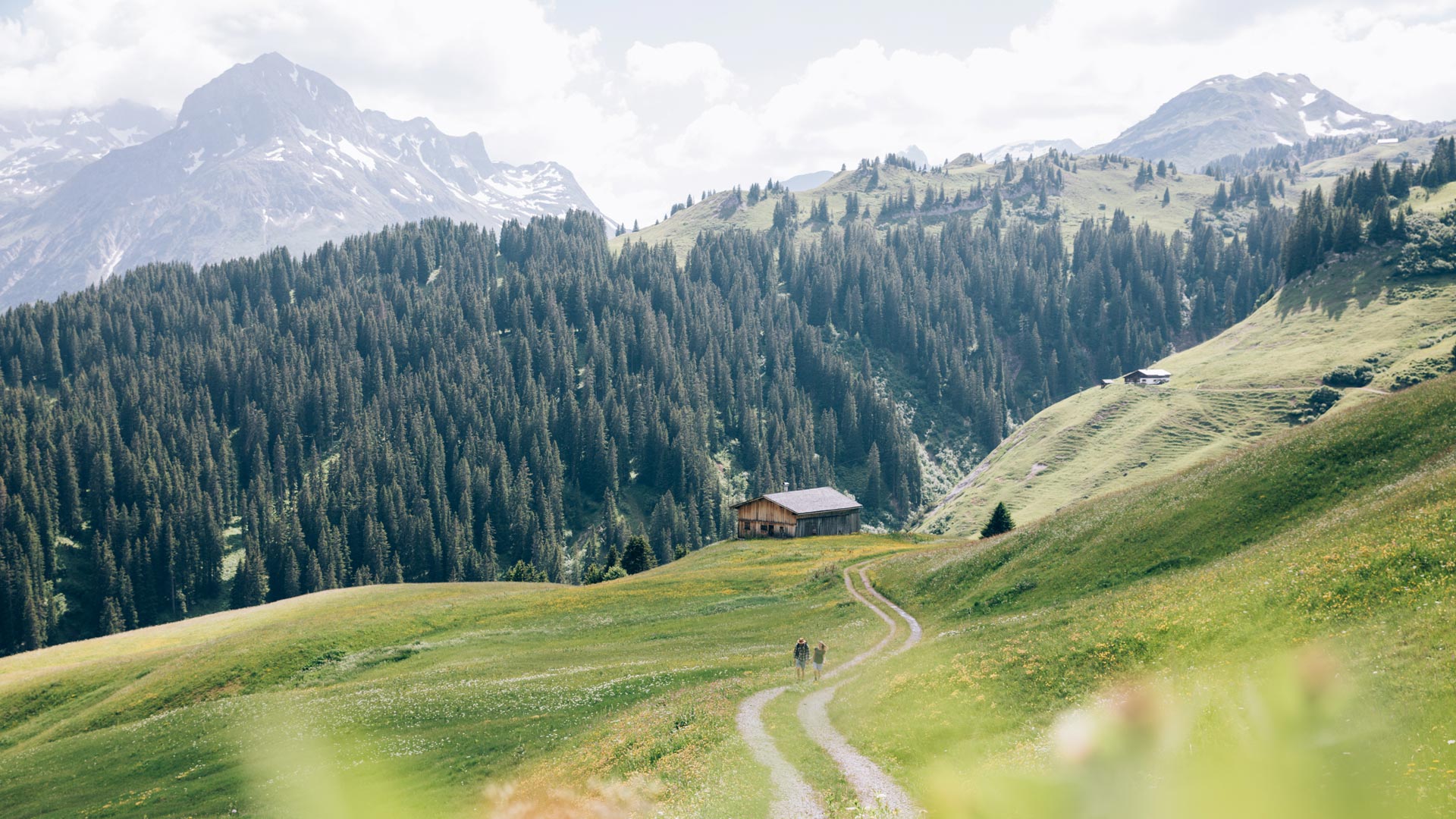 The Arlberg Trail – above all mountain...

Sporty long distance hike - the new Arlberg Trail does connect all 5 Arlberg villages (Lech, Zürs, Stuben, St. Christoph und St. Anton). In three legs and the assistance of cable cars and bus rides you will take about 40km of hiking along the most breath teaking alpine cenery. It is a well marked round trail with a total distance of 50km (approx 1/5th of the distance can be taken by cable car). We recommend to start in St. Anton and follow the trail clockwise (so cable cars are connecting best possible). You also can enjoy single legs and light alternative routes. 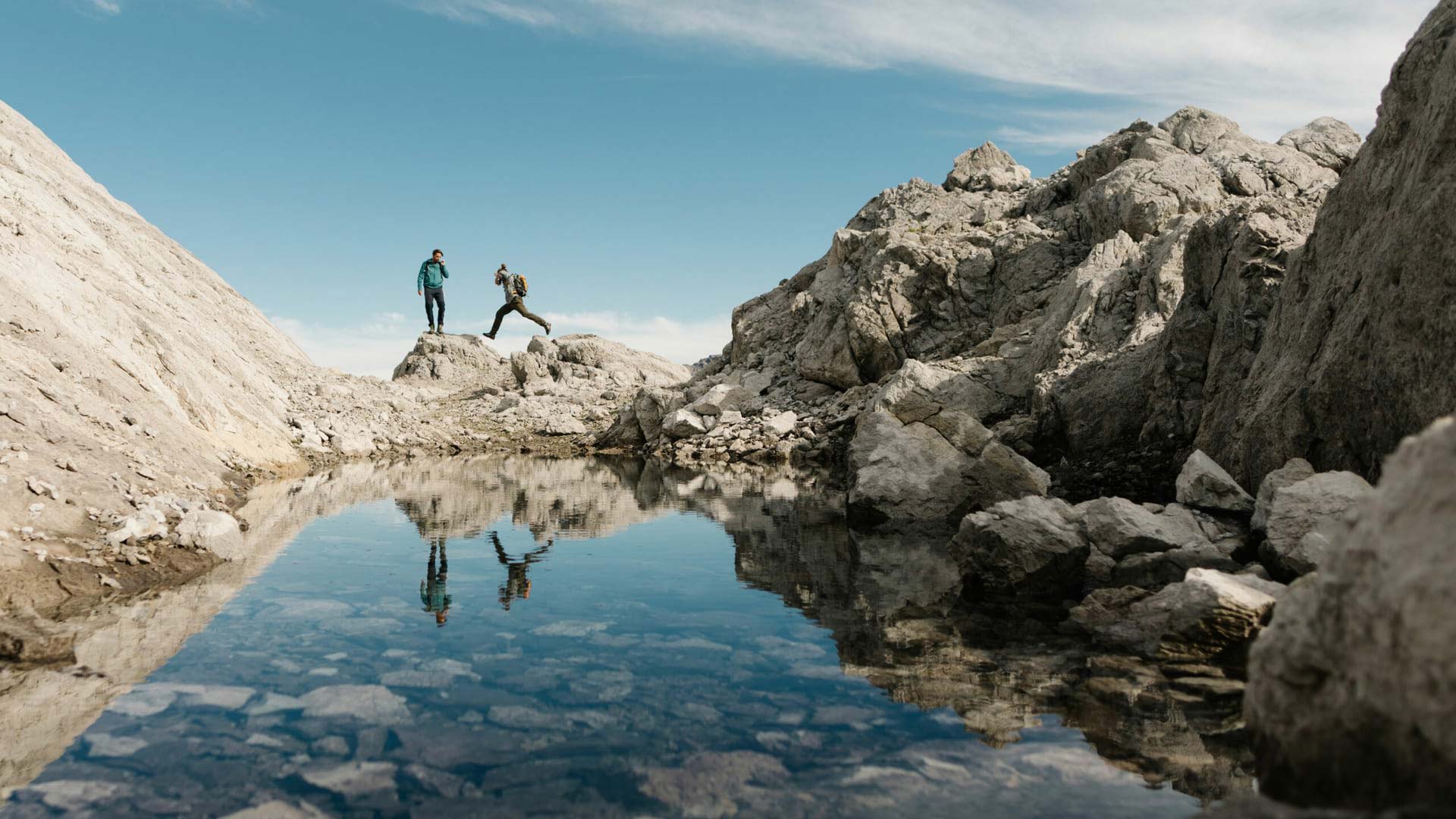 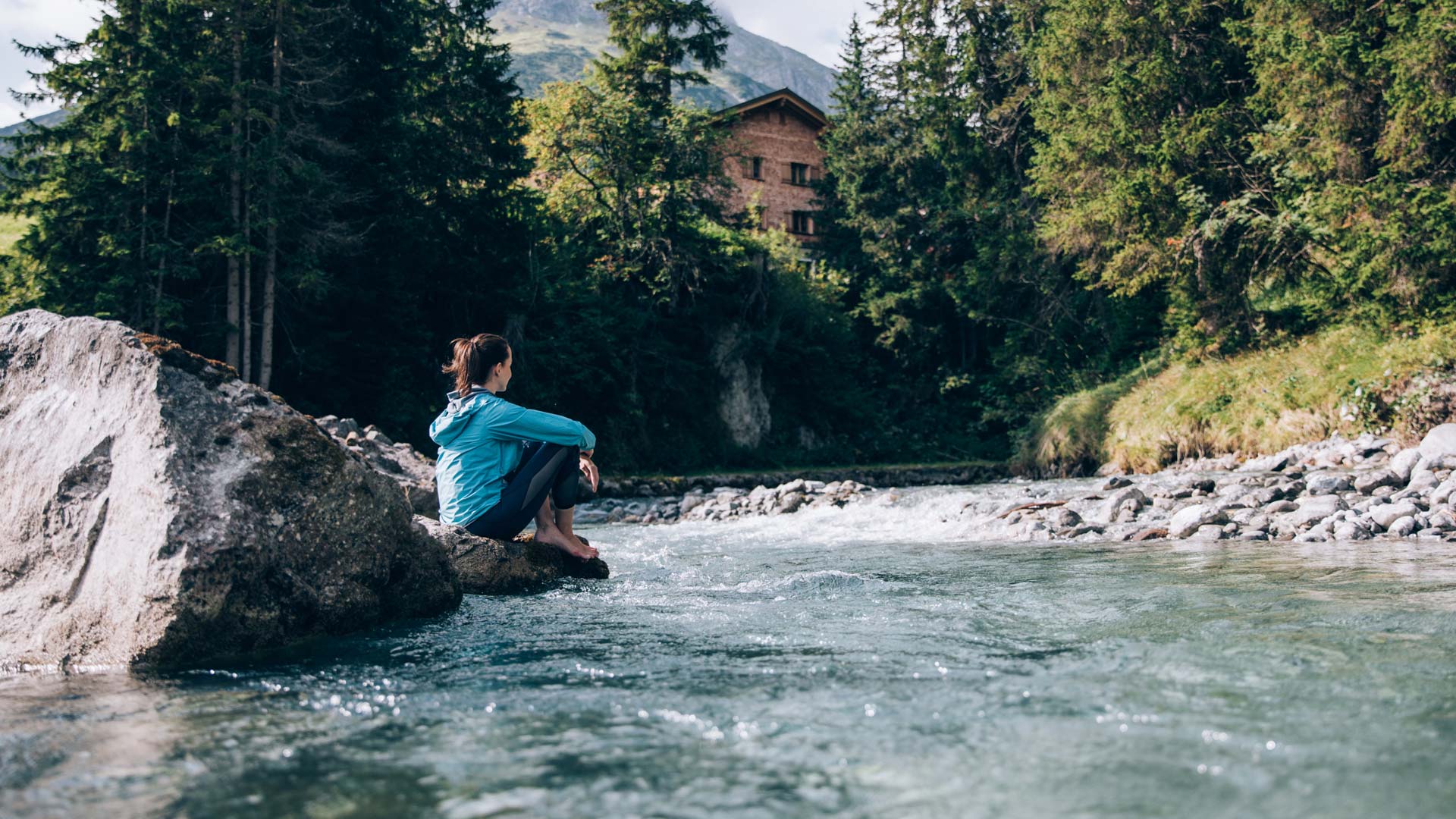 On around 125 kilometres, the Lechweg offers a unique nature experience. The hiker follows the Lech from its source near Lake Formarin in the Austrian state of Vorarlberg to Lechfall in Füssen in the Allgäu. Hubert Schwärzler is the father of this long-distance hiking experience. For Lechweg hikers, Haldenhof is the ideal starting and finishing point – full service included! 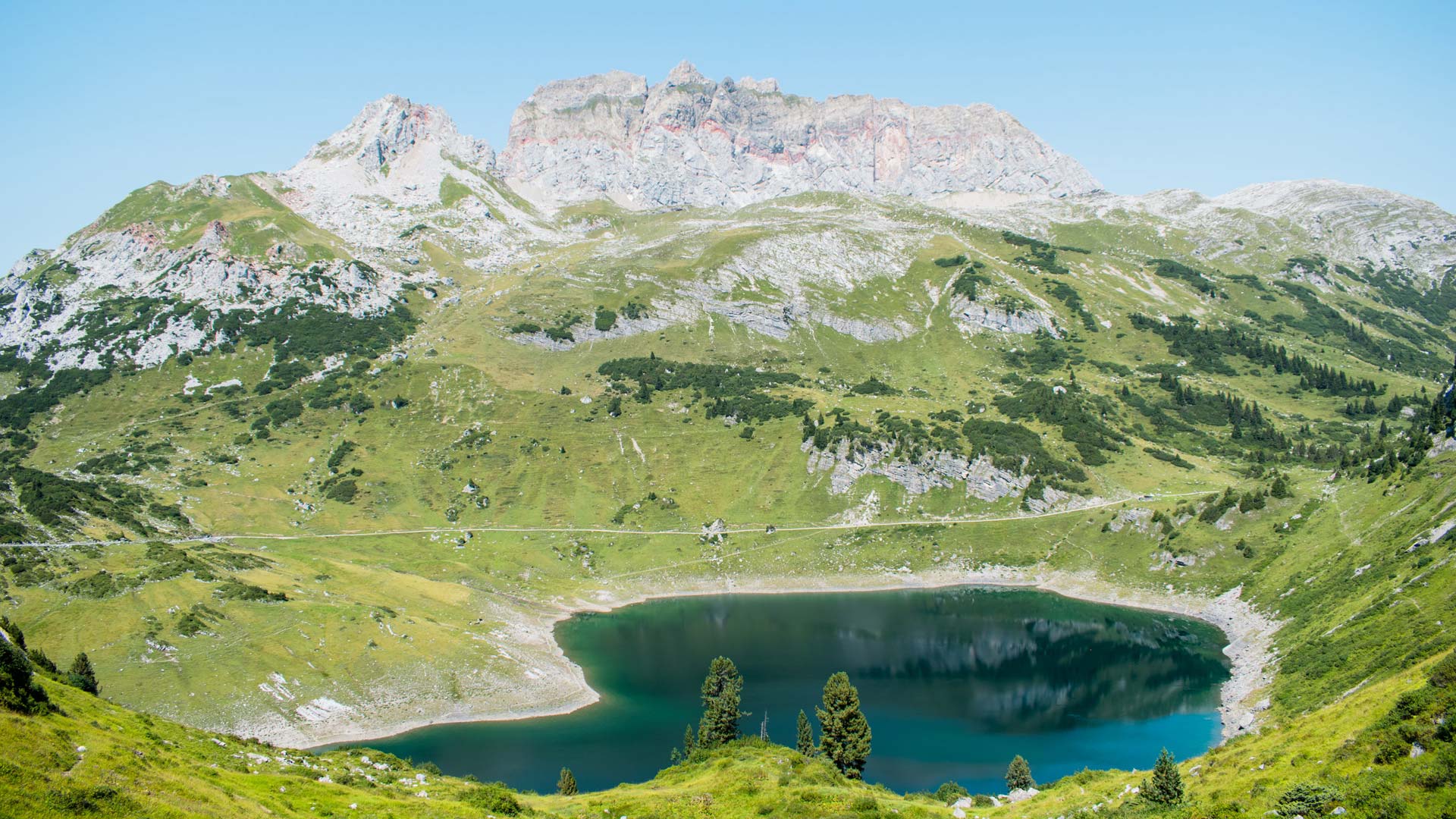 Most beautiful place I
Lake Formarin

At 1,793 metres, Lake Formarin is not only a place to gether new strength for those looking for a break, but also the starting point for the 14.6-kilometre section of the 125-kilometre Lechweg from Lech to Füssen. A bus takes hikers comfortably from Lech Zürs via a toll road up to "Austria's most beautiful place". A short dip in Lake Formarin refreshes the body and the mind delights in the great panorama of this natural gem. In addition to binoculars, provisions and a drink bottle, hikers should also pack a fishing rod in their rucksack, since fishing is also allowed in the charming high mountain lake.

With its intense blue and green, the 15.9 ha Lake Formarin shines like a small gem on hikers en route to the Red Wall. Now, at the latest, is when everyone realises that this place has something mystical and magical and is actually a little treasure on earth. Lake Formarin forms anew every year as a reservoir for the meltwater – its drainage runs underground. 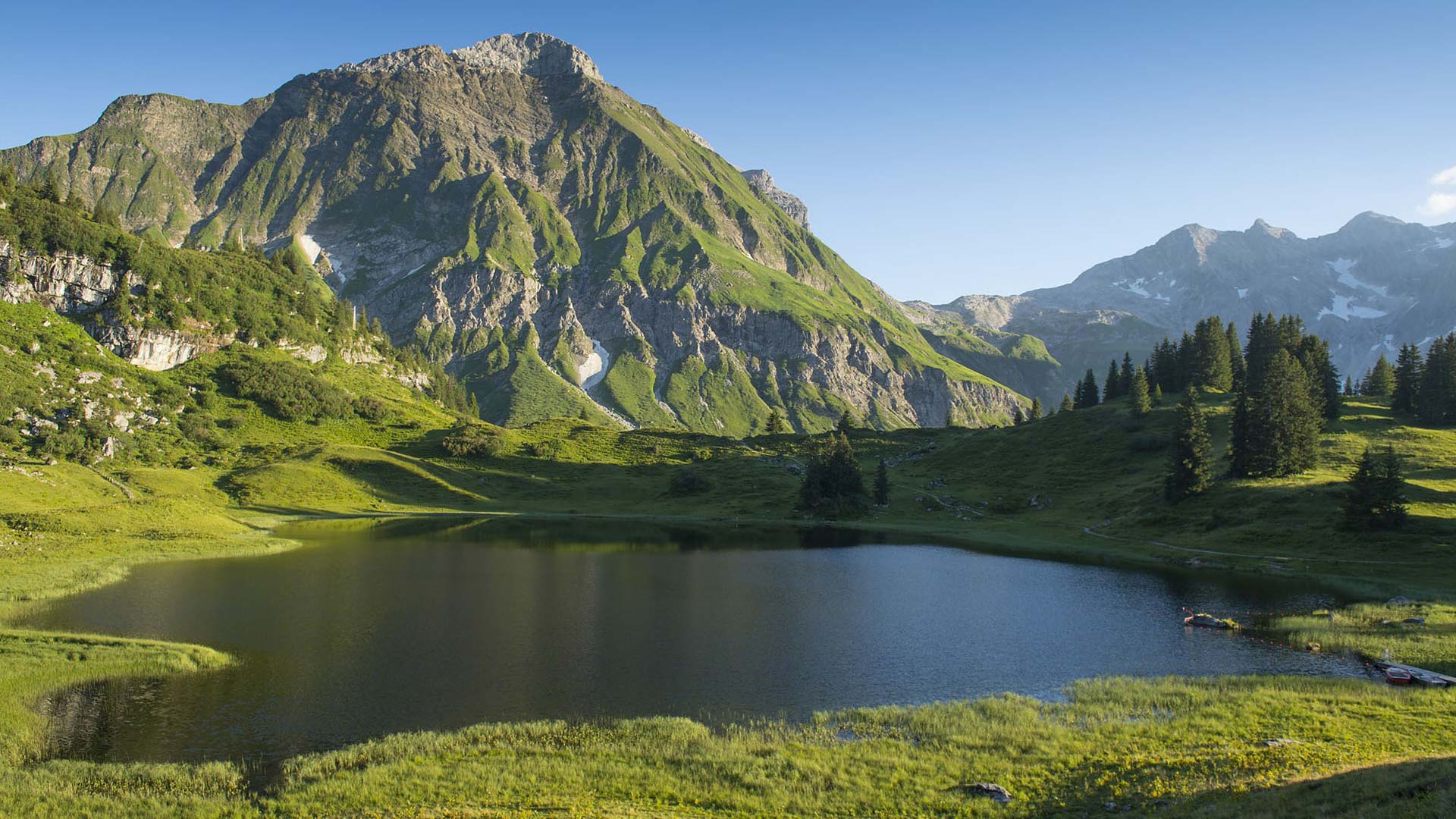 Lake Körbersee is located south-west of the Hochtannberg Pass in the Austrian state of Vorarlberg in the municipality of Schröcken. It lies in the Lechquellen Mountains at an altitude of 1,654 m above sea level and can only be reached on foot.

With an area of around three hectares, it ranges among the smaller lakes in Vorarlberg, but is distinguished by its excellent drinking water quality. The lake offers a protected habitat for fish such as trout and the rare plants on the banks. A hotel is managed near the lake. Bathing is not prohibited, but even on hot days the water stays cool at around 14 °C.

A few metres east of Lake Körbersee lies Lake Kalbelesee, another small mountain lake. The entire lake area is protected and is listed in the Vorarlberg Biotope Inventory as a biotope worth protecting.

Around 125 m north of Lake Körbersee is a two-person chairlift that leads to the Falkenkopf (Falken ski swing (Körbersee)).

Lake Körbersee was voted Austria's most beautiful places in 2017. In the programme 9 Plätze - 9 Schätze (“9 Places - 9 Treasures”), ORF viewers voted for this location, which was chosen by the ORF state studio of Vorarlberg in a preliminary round and proposed in the finals. This made Vorarlberg the two-time winner of this competition, which has been run by ORF for 4 years.